The method for user notification in instrumented rooms presented here is realized with the aid of audio signals (audio cues) integrated in a spatial ambient soundscape. In contrast to established audio alarms we try to provide a notification tool working in a more discreet and peripheral way. We use a so-called core song representing the musical fundament, which can be enriched with selected instruments to trigger a notification. With the seamless integration of preselected instruments in the playing soundscape we are able to use such a system also in multi-user environments.

To guarantee the musical control of sounds and instrumentation, we arranged and recorded three soundscapes, recording all instruments separately to create modular ambient core song. To determine the composition constraints important for creating functional music, cognitive psychological and musicological aspects were considered, leading to three ambient musical compositions. The corresponding sound files (wav files) are stored in a sound repository. For each composition, we provide several notification instruments which can be selected in the developed interface.

In order to achieve a truly peripheral notification system, various parameters have to be considered. An ambient sound has to be non-intrusive and non-disturbing. The sound has to hit the right balance between conscious and unconcious perception and be recognized only in the case of a relevant event without disturbing other users. In order to achieve this, the user has to choose "his instrument" and has to learn how it sounds. The chosen instrument will be seamlessly and harmonicallly integrated in the core song without recognition by other users. To increase this personal addressing effect, we included the spatial audio framework SAFIR for positioning the sound sources in the room. 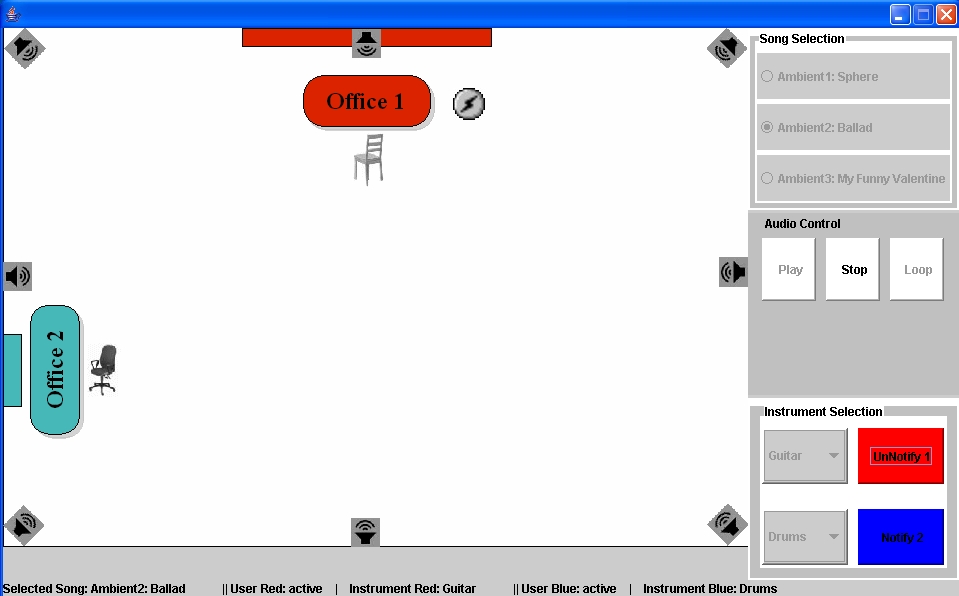 In order to test our approach, we implemented a graphical demo interface in Java, which also serves us for a user study. We created a test scenario with two users and two selectable positions. The interface consists of an schematical figure of the test environment with two workplaces, a control section and a status display. It is used as follows: