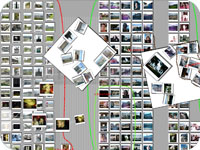 Flux is an application for digital photo collections that provides methods for organizing and sharing photos in a convenient manner based on real-world physical interaction on a tabletop system. All interaction is touch-based, so photos can be freely scaled, translated and rotated simple by touching them with either one or two fingers or pens. 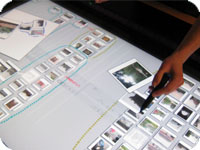 The system allows the user to create free-form clusters of photos that can be hierarchically nested and given a name and a color to make them easily distinguishable. Additionally, it leverages the abilities of the machine by providing four different automatic orders: Photos can not only be sorted according to the time they were taken (with the possibility to focus on certain sections of time), but also based on their visual similarity and their quality (i.e., blurriness, lighting). These attributes are extracted through a machine-learning component of the system. Another available order is a combination of time and similarity where visually similar photos are combined to piles if they also share a similar timeframe. Thus, redundancy of photo series is decreased and overview enhanced. 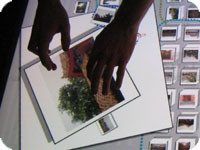 Photos on the background can only be temporally manipulated to conserve the automatically created order. But users can create copies of photos and clusters on additional overlying workspaces where they behave more like physical objects. These copies can be freely (and permanently) transformed but also be arranged by the system.

You can find a video of Flux in action here.