The Fluid Beam is a projector placed into a moving unit mounted on the ceiling of the Fluid Room. This device makes it possible to use any surface in the room as a projection surface. In this way the whole instumented room is turned into a continuous display.

In the scenario described above the projection surface is usually not perpendicular to the projecting direction of the beamer. This leads to a distortion of the projected image. Our goal is to correct this distortion and we achieve that by using a simple optical trick: if we display the object we want to show as seen from the point of view of the projector then the distortion is reversed when it is projected and it appeares undistorted. The figure below illustrates this phenomenon: 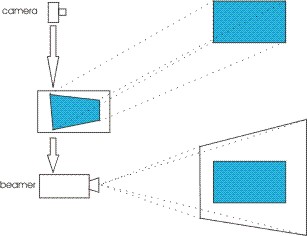 This is achieved by creating an exact virtual model of the instrumented room with a virtual camera placed in it exactly the same way as the projector in the real room. The objects we want to display are placed on the appropriate display surfaces in this virtual model and the movements of the projector are synchronized with those of the virtual camera, so when the camera is moved to an object in the virtual room the projector moves to the corresponding position in the real room and displays it there so that it is rectified.

In order to enable some kind of interaction with the projected image we attached a camera below the projector. In this way we will be able to recognize gestures and maybe use the projected images as touch screens. The camera can also be used for a self-calibration of the Fluid Beam or for marker recognition.